Holden: the end of an era

Just a heads up that this post contains my memories as seen through rose-tinted nostalgic glasses.

Back in the late 80s, Australia was a country of 16 million people that had its own car manufacturing industry, with The General fighting against Big Blue to produce amazing vehicles for both families and rev-heads alike. Cars were selling like hotcakes. Cars were racing in the Australian Touring Car Championship. Long stints in the Bathurst 1000. Brockie winning almost every time, in his Holden Commodore. And my love for the automobile flourished in these formative years of mine. The humble Commodore was just a piece of that.

My absolute youngest memory of a Holden was my grandfather’s VK Commodore wagon, in sky blue. Pappou George didn’t have it for very long, upgrading it to a silver VN Commodore Executive wagon in 1989, and most of my memories of whatever car he had owned at the time (he went through many) were of the VN wagon.

For me specifically, weekend afternoons at my grandparents’ house meant my pappou popping the hood of the VN, and telling me in Greek, broken English and lots of pointing, how an engine works. Where the air comes in, where the petrol comes in, and how it’s all mixed up before being injected into the cylinder and set on fire by spark plugs. How the valves work, what the belts do, and where the exhaust comes out. Pappou also used his VN to show me how to change a tire, replace blown brake lights, check oil levels. My grandmother drove the car too, us kids used to pile into the back seat and drive to pappou’s work to pick him up. We’d hide in the boot (just flip over the rear bench) and hide to try and surprise him when he opened the door to get in. The real Aussie family car.

My parents had a poo-brown Ford Cortina that had transmission problems, a tendency to back-fire, had tears in the vinyl seats and one of the rear doors were jammed shut and couldn’t open. It was on its last legs, and my father traded it in for a 1988 VL Commodore wagon — Executive of course. Finally air conditioning, and overdrive on the transmission shifter! The night my dad brought it home, I grabbed the owner’s manual and pored through it all.

That VL wagon of course had the highly revered Nissan RB30E engine. The engine that famously had the urban legend of it being so smooth, you could balance a 50 cent piece on its side on the head cover, and it wouldn’t fall over. The VL was the car I learnt to drive in, the car that gave me independence (when I could borrow the keys from Dad), and the car I had my first accident in – thankfully just a busted up bumper. My uncle, aunty and cousin called it the “Dooloo”, with affection of course, since the number plates on the VL started with “DLO”. The car wasn’t without problems – it kept warping brake discs and the rear tailgate had to be propped up by a tomato stake we kept in the boot due to my dad not bothering to replace the gas struts – but overall it was a well loved family car.

The family’s Ford Cortina did a decent job – when it worked. 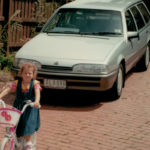 The years spent buying Wheels magazines back in the early to late 90s is also a fond memory for me. I remember reading up on what the newest series update entailed for the current model Commodore at the time (or Falcon for that matter), shootouts between the best HSV offering versus the beefiest Tickford available, editorials about how amazing Australian-designed and built cars were in comparison to what the rest of the world were importing onto our shores. The centre poster of the new-for-the-time HSV GTS-R was something I adorned my bedroom wall for many years. For many mornings to come, as I woke up my eyes would lay on that taxi-yellow body shape, those black tri-spoke alloy wheels and that bloody huge spoiler on the bootlid. I dreamed of owning and driving a BMW E34 M5 or an E38 740iL, but who was I kidding? It was the Commodore that would be more accessible for me to own, and which I put posters of it up on my walls.

We weren’t the only one in our circle with a VL Commodore – our next door neighbour had a wine-red VL sedan (Limited edition!) that a few years into ownership was written off by a truck driver that blacked out behind the wheel. Despite a truck smashing into the car, our neighbours survived the accident – the sheer force of the impact bent the steering wheel in half. My godbrother had a VL Calais that was just absolutely mint – pop up and down headlights, shiny factory Calais rims, lowered, tinted, with sunroof. I recall him coming by our house and taking 9 year old me for a ride, pulling into a dead-end side street near my house and introducing me to what I now know of as a burnout – filling the rear window with tyre smoke. The look on my godmother’s face when I excitedly blurted out what my godbrother did when we arrived back home was priceless.

However there was no bigger Holden fan than my first cousin, Nick. The amount of time he spent drawing Holdens, talking about Holdens, dreaming about Holdens, looking up Commodore listings in Unique Cars issues that he kept in stacks in his bedroom. When he was old enough to work and started earning a wage, he spent it all on – you guessed it – Holden Commodores. My uncle and aunty’s house would be littered with Commodores, all in different states of repair. You’d almost trip over them when walking down the driveway. He spent his school’s work experience week with the Holden design studio, and after a couple of career changes ended up working for Holden themselves, and then HSV, even becoming a test driver at one stage. This guy lives and breathes Commodore. No doubt some of this passion rubbed off onto me. 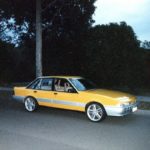 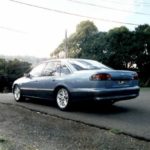 Literally the first car I drove on my Ps

I still remember Nick coming over to my house when I was in my mid teens, and pulling a single pegger in his bright yellow BT1 VL Calais down our street. That VL unfortunately was stolen at one stage out of the shop it was in to get some work done, and the thieves had outrun the police who gave chase on the freeway. I remember the VS Calais he rocked up in at my house when he heard that I got my P plates, and just tossing the keys to me to take it for a drive.

My feelings for Holden’s demise is of anger, sadness, melancholy. Most people have been seeing the writing on the wall for Holden for many years now, as buyers’ tastes no longer matched the offerings of Holden product available in Australia, the lack of support from GM for such a small market, the glacial pace that Holden was moving to try and keep up with just bloody moving these cars off the lots. The company was on life support, and GM just pulled the plug a day or so ago. Finally, the last nail in the coffin that contained only a husk of what used to be one of the best car manufacturers in Australia.

Australia is (or used to be, depending on which angle you see it) a unique snowflake in the world. We have the man power and know-how to make a decent automobile – from sketches, to model design, to production, and subsequent servicing. Many people are trying to pinpoint the demise of Holden on one thing, but I don’t believe it’s that simple. Was it buyers getting disillusioned with the product offering? Was it Holden management moving too slowly to adapt to changing markets? Was it the Australian government pulling the pin on funding to GM to keep the factory and design team open? Was it the revolving door of CEOs in the years of late, leaving indelible marks to the business in detriment of the brand?

Was it all of these points?

I believe so. Most people would say the era of Holden ended with the halting of production of the Commodore. Other people, that had a better idea of how changes like this happen with car manufacturers, were clinging on to hope that Holden would turn things around with another car product, remembering that the same naysaying occurred when the Kingswood was killed off to make way for the Commodore. But unfortunately for those who are fans of Holden, this indeed was the final tug of the life support power cable.

Vale Holden. You will be remembered.

Please note that the hero image used for this blog post is not of an automobile that I nor my family had owned, but looks similar to the VL wagon that we used as our family car.
“Holden Commodore VL Executive Wagon” by Jeremy, available at https://flickr.com/photos/126433814@N04/20948238235 under a Creative Commons Attribution 2.0 licence. Full terms at http://creativecommons.org/licenses/by/2.0.